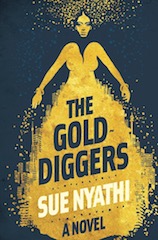 The Gold Diggers by Sue Nyathi is a standout novel that rings alarm bells about migration from Zimbabwe to South Africa. The story follows seven Zimbabweans as they illegally cross into South Africa looking for work or to reunite with their family. One thing that instantly catches your eye is the author’s use of biblical overtones to describe the plight of Zimbabweans. Like Egypt under Pharaoh, Zimbabwe is under the rule of Mugabe, who runs the country with an iron grip. Corruption and mismanagement of resources have decimated the economy. Restless Zimbabweans feel trapped, and believe their only way out of such oppressive conditions is to embark on the perilous journey across the Limpopo River. Initially, the seven young travelers are filled with hope at the prospect of being delivered into a prosperous land—the land of milk and honey. However, as they come face to face with the harsh living conditions in Johannesburg, their faith quickly wanes; they fall prey to sexual and material enticement.

If the wilderness was the setting to lose one’s faith, then Johannesburg becomes the place to lose one’s morals. As the title connotes, The Gold Diggers plays on the idea of exploitation. At first glance, we see these characters arriving in Johannesburg all too eager to undertake any menial job to earn money. Gold digging, in this case, is a metaphor for earning a trifle income while holding out hope that one’s luck will change. Characters such as Dumi, Chamu and Portia best exemplify this outlook. They are characters who in their haste to escape idleness find themselves in a place of constant and meaningless work. They weather menial jobs such as cleaning offices or waiting tables only to find their fortunes suddenly change for the better. What Nyathi does well is to show the different ways hardship molds and mutates people; in this case living without lawful status forces people to shrink themselves and tolerate abuse. Also, such desperation forces people to grasp at any thread of opportunity that crosses their path.

It is this desperation in a foreign territory that lends The Gold Diggers its second interpretation. Thus, the title can also be read as a commentary on the way sex is used to attain material wealth. Regardless of whether a character is flamboyantly happy to use sex to get what they want or whether they fall into it out of desperation, Nyathi informs the reader that sex is the currency to navigate the wilderness in Johannesburg. While naively seen as a place of refuge and prosperity by the travelers, one character corrects this image by pointing out, Johannesburg is “Sodom and Gomorrah.” A place gripped by the “clutches of sin” and “inebriation.” Such concrete imagery helps us to see that this city of gold is also a place of hostility, danger, and sexual decadence.

Overall, Nyathi’s book is a refreshing read. She is a straightforward writer who doesn’t burden the narrative with too much figurative language. In this sense, her style is reminiscent of Buchi Emecheta. The story is rich with geographic details that work well to stress the point that migration creates family dysfunction. We see children separated from their parents and left behind to be raised by grandparents or abusive relatives. We also see spouses separated for long periods of time, a situation that leads to cheating and marital strife. If any criticism is to be pointed out, it’s with the number of characters in the story. A couple of the story arcs lacked narrative depth and their resolution, especially GuGu’s narrative, felt rushed. Despite this shortcoming, this is a well-written novel that adds a unique perspective to discussions of African migration.