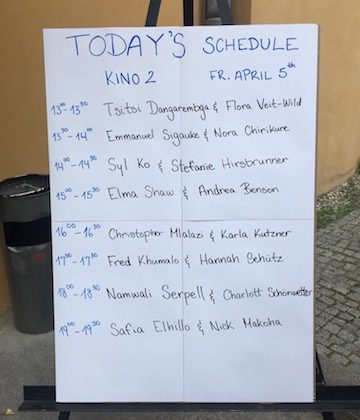 The InterKontinental African Book Festival in Berlin brought together some of Africa’s most respected writers to discuss migration. The mood at Babylon Theater was one of excitement and vocalized admiration; after all to have TsiTsi Dangarembga, Ben Okri, Novuyo Rosa Tshuma, Namwali Serpell, Musa Okwonga, Zakes Mda and many more on one stage, spoke to the magnitude of the moment. There was a collective celebration of African thought and the way literature can be used to explore the push and pull factors that instigate migration. Thus, the meat of the festival centered on the ways new literary productions are providing a counter-narrative to mainstream policy-driven accounts. Unlike statistics, African literature allows the reader to understand the plight of immigrants, and to empathize with their hardships and successes. For some immigrants, challenges such as poverty, language, and homesickness often are not openly discussed; yet these factors are hindrances to full integration into a new society. Here are some of the panel discussions that shaped the festival.

New Names, New Voices, Reflections of Migration Literature, was a panel discussion that featured Sue Nyathi, Ijangolet Ogwang and Namwali Serpell. The writers did a superb job of telling us about migration within Africa. They focused on experiences such as the pressures to financially uplift families left behind and the trauma of failing to realize one’s dreams. The authors also candidly spoke about the sense of fear that comes with not being fully integrated into the immigration system; in particular, the fear to jeopardize one’s livelihood or immigration status.

Transitioning to Freedom: Writing Under Fire was another panel that helped us to understand the role migration plays for writers living in acutely repressive environments. The panel discussion, which included Zakes Mda, Christopher Mlalazi, and Sefi Atta cited physical threats, book bans, and community rejections as examples of intimidating behavior. Zakes Mda explained that for him, migration provided a space where he could write about the apartheid state and connect with other artists from South Africa. For these writers, migration became a catalyst for freedom of speech, self-discovery and economic opportunity to work on one’s craft.

The festival also spotlighted emerging issues such as Veganism and the Internet. In a lively discussion featuring Bibi Bakare-Yusuf, Ayinde Howell, Syl Ko, these writers examined how Veganism intersects class, social justice, environmentalism, and race. Panelists agreed that African people often have been excluded from the mainstream narrative; however, there is a conscious movement to embrace Veganism. For many, Veganism is not just a diet but a response to over-consumerism and capitalistic exploitation. Paraphrasing Bibi Bakare-Yusuf, Veganism within a political context is the rejection of ideas and actions that debase animals into a role of “service for people.”

Lastly, the panel titled Digital (IM)-Migrants moderated by Musa Okwonga and featuring Ainehi Edoro, Thando Mgqolozana, and Emmanuel Sigauke spotlighted the role of technology in advancing African literature. Speakers looked at how the internet has erased barriers that often marginalize African voices. Ainehe Edoro, the founder of Brittle Paper, summed it up this way, the Internet has allowed “African writers and marginalized voices to flourish, it has redistributed the power dynamics in publishing. Social Media gives writers direct access to their audience; they can write, publish and distribute their work” without going through publishing gatekeepers. However, the drawbacks of the internet were not fully discussed; I foresee issues such as lack of compensation, lack of content editors, and lack of archiving continuing to dominate future discussions. Overall, this was an essential gathering of Africa’s talented writers, we must continue to embrace African literature as a tool that documents and assesses a wide range of experiences faced by Africans.

Book Review of The Gold Diggers by Sue Nyathi