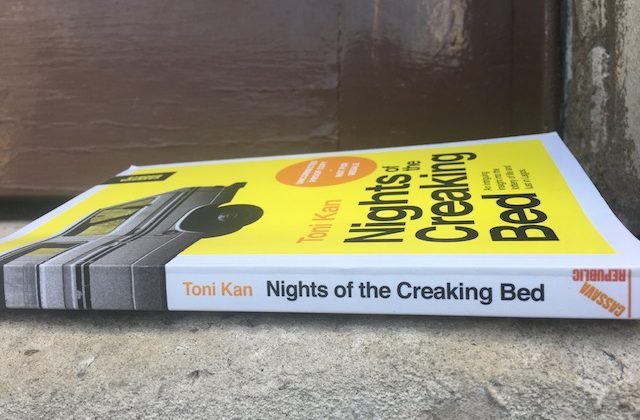 Nights of the Creaking Bed is a collection of short stories written by Nigerian author, Toni Kan and published by Cassava Republic Press. Kan has an acute eye for detail which he showcases in tightly packed short stories. His tales function as snapshots—giving you a quick view into the lives of unhappy and misbehaving women. Betrayal, regret, and abandonment emerge as key themes in the book. By focusing on these ideas, Kan directs our eyes towards the many ways betrayal causes harm. For example, in the opening story, Strangers—the author looks at mob justice and the rush to judgment. In this story, two boys are wrongly accused of a crime they didn’t commit; the neighbors ignore their pleas of innocence despite witnessing them live an exemplary life. This act of betrayal towards a neighbor illustrates the moral shortcoming of the people in a community who feel aggrieved and disempowered. In essence, Kan is saying that people in powerless communities are easily riled up to commit violence in the name of justice; justice that often is denied to them. Toxic neighborly conduct is also discussed in the title story, Nights of the Creaking Bed. In this tale, we see a mother’s relationship with a married man used as a weapon to extort money from her. Again, this story shows how desperation fuels rage towards those perceived to be better off.

What binds Kan’s stories together is this idea of lust; whether it’s sexual or financial, desire becomes the driving force for many of the characters in the book. For example, in The Passion of Popolo, Kan reimagines the Greek tale of Oedipus Rex. In Oedipus, the title character is fated to kill his father and marry his mother. Oedipus tries to defy his fate only to end up fulfilling it. Similarly, In Passion of Popolo, Kan writes about the sexual awakening of Popolo—who as an adolescent walks in on his naked mother cheating in his bed. The intimacy of her betrayal leaves Popolo silent, shame-filled, and an accomplice to the act. Instead of feeling disgusted and distant towards his mother, Popolo’s infatuation for her multiplies. This lust for what is forbidden is also seen in another story titled My Perfect Life, where a contentedly married Sylvia begins an affair with an ex-lover and contemplates deserting her family for him. Sylvia- the main character in this story embodies the lust and regret that floats through the book. She is a person overcome by the memory of heartbreak; and is willing to sacrifice everything to correct that adverse outcome.

Regret and the desire to reclaim a lost self is most intensely illustrated by mothers, particularly mothers with unwanted boys. In these stories, the mothers are manipulative, unloving, and quick to abandon their children. As one of the characters notes, “My mother wanted to see the world, but I was a noose around her neck.” This representation of mothers as heartless people speaks to the grief and injury brought on by motherhood. The mothers in these stories are grieving the lives they could have had if it wasn’t for the burden of children. Toni Kan’s stories are sharp—and leave you wanting more!

Book Review of The Gold Diggers by Sue Nyathi