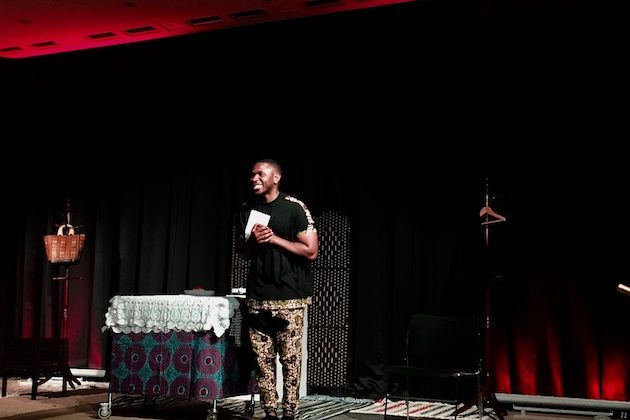 Africa Writes, the annual literature festival sponsored by the Royal African Society is currently taking place in London and will end on Sunday, July 1, 2018. One of the most sought after ticket of the festival was to Yomi Sode’s well-received play COAT. In a sold-out show at the British Library, Mr. Sode brought to life the complexity of the African immigrant experience where two cultures are in friction over mismatched expectations. On the one hand, the play examines family reconciliation; it’s an intimate portrait of a son trying to lay to rest his feelings of resentment and annoyance towards his mother. His goal is to cook her a traditional dish as an act of peacemaking as well as an invitation to fellowship. On the other hand, the meal itself takes on a double meaning where Sode not only struggles to remember the recipe but also finds himself under pressure to get it perfect, to line up the ingredients just so. Cleverly, Sode is critiquing the burden often placed on immigrant children who straddle two cultures; children who might have left home without proper closure, who don’t speak their mother tongues, and who are ridiculed in both cultures. In essence, Sode is asking, how do you find a middle ground? How do you bridge the gap between what you are expected to be and who you are? In asking these questions, the play is also making a general commentary of immigrant community pressures to impart on their children the right elements of their culture. Played with great emotional dexterity, Sode oscillates between humor, flippant insults, and combustible inner turmoil. I highly recommend seeing COAT by Yomi Sode.

Clemantine Wamariya Writes a Moving Account of the Rwandan Genocide