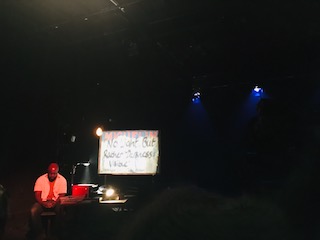 Nick Makoha is a Ugandan-British poet and playwright. Recently, he presented his play, The Dark, at the Ovalhouse Theatre in South London. The title of the play is taken from Makoha’s poem of the same name that is featured in his collection Kingdom of Gravity (2017). In both the play and the poetry collection—Makoha examines issues of forced migration. He speaks about his personal experience as a refugee and the trauma of arriving in a new country. In this play, Makoha adds to the collective memory of exile. In doing so, he wrestles with the conflict of estrangement, of being unsettled, and of leaving a home that continues to haunt you. The play radiates with urgency, reminding the audience about the politics of the past and how a nation can fling its sons and daughters to foreign places.

The play begins with eight strangers uneasily boarding a mini-bus; embarking on a hazardous journey along the Kampala-Jinja highway. The travelers quietly fidget in their seats, gripped by a catalog of fears: terrified of roadblocks, of soldiers, and government sympathizers. The two actors, Michael Balogun and Akiya Henry, do a superb job of bringing this anxiety to center stage. Embodying many characters, the actors keep us in a state of uncertainty. We see them frantically shifting the landscape by arranging and rearranging the bus seats. In these moments they capture the insecurity within the country, showing us that the ground underneath the people is unstable.

While the mood inside the minibus is one of agitation, we also see a quiet resiliency evidenced by the gentle interactions between the passengers. Their feeling of vulnerability is palpable and well executed by the set designer; whose loosely rocking luggage rack, loud radio announcements, and jittery characters all suggest an awareness of the threat hovering over their heads. Nothing is certain, it says, except the dark to come. And this is why Makoha’s play is so gripping. If taken as a commentary on life under Idi Amin, this play shows us a portrait of state failure that has been largely forgotten. In essence, the play is not about Amin but about the consequences of malignant leadership and how it penetrates to the ground level. The play illustrates how fear trickles down into everyday life. Bribing, stealing, and threatening all became routine social interactions in a failed state. The escape, however, does not offer the restoration one expects. Instead of compassion, the traveler emerges from the dark to find the light equally blinding. The suspicious gaze cast on the refugee is also damaging; adding to his sense of displacement.