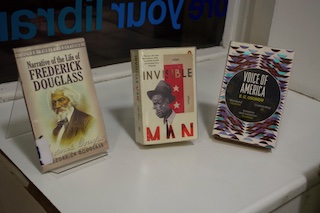 This past February, at St Johns Wood Library, we hosted a literary event that honors the contributions of African American Writers. This event was led by Sarah Ozo-Irabor (Books & Rhymes), Culture Critic & Co-host of iTunes No. 1 Literature Podcast; and Trenita Hodge, a fellow American living in London. We were able to engage in a lively discussion focusing on the works of well-known and less known writers. This event gave us an opportunity to engage our community on the diverse American experience as it is presented in literature.

To give a quick overview of African American Writing is first to acknowledge the different ways one can study this literature. From a historical, cultural, regional, or thematic angle — African American texts give insight into what it means to be a person whose heritage is tied to Africa. My approach has been to look at it from a historical point of view; first interrogating classic writers whose works are the foundation for understanding the relationship between an individual and their country. Then contemporary authors, these are unapologetic disruptors who probe the inner turmoil of their characters. Lastly, African immigrant literature – can be seen in the new voices asserting their presence in the American canon. From testimonial, essays, and memoirs to novels, poetry, and music- African American writers have helped us understand both the collective aspirations of a nation and the individual successes and struggles of its citizens.

Classic writers like Frederick Douglas, Zora Neale Hurston, James Baldwin, and Toni Morrison…have left enduring legacies that speak on how the nation should confront its history and power. These authors wrote about citizenship, freedom, and oppression. In so doing, they called attention to the historical trauma of slavery and segregation. Also, they paved the way for new writers in both a tangible and an aspirational manner. They mentored new writers, helped find funding for them, collaborated and provided accommodations. Most of all they inspired others to write.

Lorraine Hansberry, Maya Angelou, Ta-Nehisi Coates, Jesmyn Ward, and Alice Walker— are some of the contemporary writers whose legacy is illustrated by their commitment to examine ordinary life. They have expanded our imagination to see the power and resiliency in working class and middle-class families. They have highlighted life in American cities and towns—especially places like Chicago, Harlem, and Baltimore. Most of all, they have interrogated the triumphant attainment of the American dream as well as its crushing deferment.

Lastly, we cannot overlook African Americans authors writing about the immigrant experience. Dinaw Mengestu, EC Osondu, Mbue Imbolo and Barack Obama—all explore the complexity of arriving in America to seek opportunity and prosperity. We find in their texts conversations about the immigrant’s longing for America; especially the emphasis placed on education as the vehicle for success. We also see the discomforts of settling in a new country, particularly, the way ideas about citizenship and upward mobility collide. These texts question identity, belonging, and language. Both visceral and insightful African American literature captures the talent and resiliency of a diverse nation and for that fact, it deserves to be celebrated.