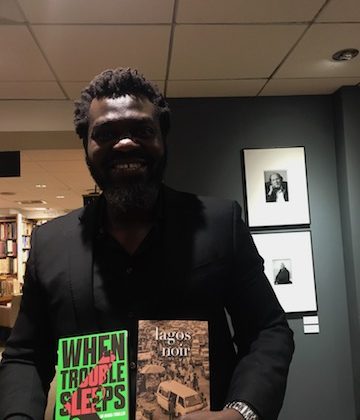 Among the new literary releases, When Trouble Sleeps by Leye Adenle stands out as a fast-paced and entertaining work of fiction. Set in Lagos, the plot follows Amaka, whose primary concern is protecting young women from rich predatory men in the city. As Amaka navigates different neighborhoods in Lagos, trying to catch the men behind the sexual and physical abuses, she becomes entangled in a plot to rig the election for governor.

To say Adenle’s writing is refreshing would be an understatement. In the last two years, he has published three works: Easy Motion Tourist (2016), When Trouble Sleeps (2018), and a short story titled, Uncle Sam, which can be found in the collection of short stories titled Lagos Noir (2018). What makes his storytelling so accessible and rich is his use of setting to reveal the motivations of his characters. For example, in Uncle Sam, the entire plot is set in Murtala Muhammed International Airport. With the hot tropical temperatures and unfamiliar faces disorienting the protagonist, Adenle shows the different ways the main character is paralyzed by fear, suspicion, and self-doubt. He illustrates the ease in which trust is given to people who are well-dressed and well-mannered because they project an air of safety. Essentially, Adenle is saying: beware of wolves in sheeps’ clothing.

The same meticulous attention to detail is evident in When Trouble Sleeps. In this novel, the city takes center-stage with each chapter referencing a different location in Lagos. He takes us on a suspenseful and often humorous tour of Lagos; where characters are either waking from blackouts or slumping in defeat. From the opulent estate homes of the powerful in Ikoyi to the congested streets of Oshodi market, Adenle uses place to examine double-dealing and betrayal, the economic hustle and bustle, and the use of public spaces to instigate violence. Through his descriptions of the crowds, traffic and fast car-chases Adenle is able to capture the thrilling and unpredictable mood of the city.

Overall, Adenle’s writing style should be applauded; he does not mince words or delay presenting the action. It is this quick pace that makes his characters so gripping. They are flawed and often selfish. For example, Amaka is fearless, witty yet impulsive. She is willing to bend the rules to achieve her desired goals, but her approach often backfires. In our interview with Mr. Adenle, he said that he doesn’t write to make social statements, yet one cannot help but admire the humor and honesty he uses to dissect the issue of election rigging. Not only does he examine the self-serving ingenuity it takes for people to undermine elections but he also goes into the financial cost, the anxiety and the unknowns that threaten that effort. Just that section alone should be required reading for political science students. We highly recommend When Trouble Sleeps by Leye Adenle published by Cassava Republic Press. Please also see our interview with the author in which he discusses the process of writing and his inspiration.