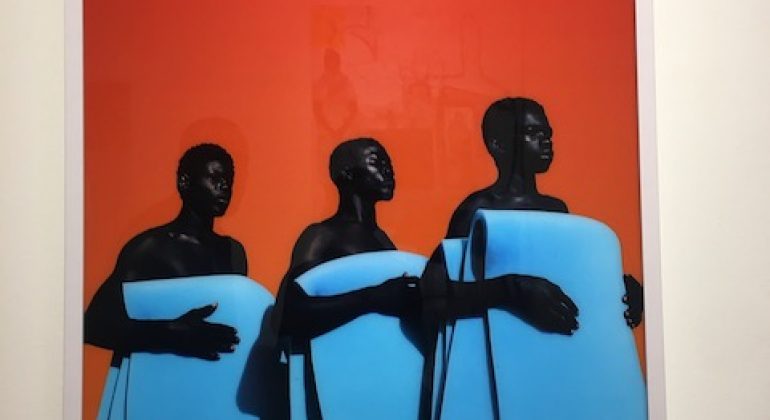 The above featured image, is by artist Prince Gyasi, a Ghanian photographer who participated in the seventh edition of the 1-54 Contemporary African Art Fair. This piece is a perfect illustration of the outstanding artists and the bold perspective they brought to this year’s event.  The 1-54 exhibition took place at Somerset House, London, and was a tribute to Nigerian curator Bisi Silva, who died earlier this year. The theme of the fair was titled, Looking Back and Moving Forward. Its central aim was to build on Silva’s vision that African artists need supportive communities to thrive.  Silva championed artistic exchanges particularly, those centered on education. She often organized pop-up workshops that encouraged collaboration, and trained students to be curators and critics. In this sense, the fair was the embodiment of Silva’s vision; it created a mood in Somerset House that was both respectful and festive. With over forty-five galleries presenting, representatives were welcoming and passionate to engage the diverse audience walking through the exhibits.

In keeping with the theme of the fair, what struck me about the exhibition was the commentary on socio-economic justice in Africa. This idea was evident in the numerous pieces presented at Somerset House, beginning with Angolan artist Kiluanji Kai Henda’s magnificent work, Fortress.  Outlined with thin black iron bars and hollowed out squares—the sculpture evoked feelings of grandeur and vacancy. In his 1-54 interview, Henda noted that this piece is a critique of the “building craze” that has overtaken African cities. Those structures reminded him of the deserts and their “ephemeral” nature. To me, this piece communicated the irony of constructing skyscrapers as markers of progress and development. In many ways, these new fortresses are intimidating in size and forbidding in terms of access. They are places that the average citizen cannot enter. Essentially, this sculpture is directing us to see the illusion of development. Henda is saying,  these structures are opulent,  unwelcoming, and fail to shelter the vulnerable. Thus,  the vacancy of this fortress is a symbol of greed and waste.

Similarly, Mary Sibande’s solo exhibition, I Came Apart At The Seams, trains its eyes on South African history. It pays attention to the throbbing discontent over economic isolation. Sibande uses sculptures and photographs to show how the tentacles of apartheid have not been severed. In her portrait, They Don’t Make Them Like They Used To (2008), Sibande wears a maid uniform while crocheting a superman costume. The image provokes feelings of servitude and heavy responsibility. Soon she discards this uniform and sculpts a purple figure, In The Purple Shall Govern. The presence of this figure covers the entire room, a commentary on the role of women during the anti-apartheid struggle. Yet for me, the most remarkable piece from her collection was the print, Turn Turn Turn Turn, (2019), in which we see the purple figure unleashing the red dogs. The image communicates the unleashing of anger and discontent towards a society that has not kept its promises of progress. It is a striking image—especially the use of dogs as ammunition—given the historical use of dogs by the apartheid regime to silence protestors, students, and women. The overall message of this image is that despite all the promises, one turns, turns, and turns to find themselves in the same position as before. In reality, one’s condition has not improved; and that is a problem that needs to be challenged.

Other standout pieces included Tadesse Mesfin’s Pillars of Life: Market Day IV, (2019) oil on canvas snapshot of Ethiopian women at the market. The serenity of this painting is contrasted with Vincent Michea’s Le Grand Marche  (2019), acrylic on canvas masterpiece that details the bustling market scene in Dakar. The painting is deeply felt; you see both young and old, women and men going about their daily life in this vibrant environment. Also, the fair included exceptional young voices such as Silvia Rosi and Annie-Marie Akpene Akussah, who were sponsored by the Thread Cultural Residency and Center in Senegal. Akussah’s fabric piece was quite remarkable for the way it married archival resources and domestic objects. She told me her goal was to challenge the migration narrative—by distorting and applying travel stamps on ordinary objects. Her intention was to question the notion of home and boundaries, as well as private and public spaces. Lastly, Prince Gyasi’s arresting photographs were the essence of warmth, vulnerability, and acceptance. They also captured the artist’s ingenuity –using the iPhone 5 camera to make most of his photos. As his representative noted, the artist embraces the idea, “you cannot wait for the right tools. Use the resources you have to make art.” I believe this statement sums up the theme of the fair perfect, looking back and moving forward.