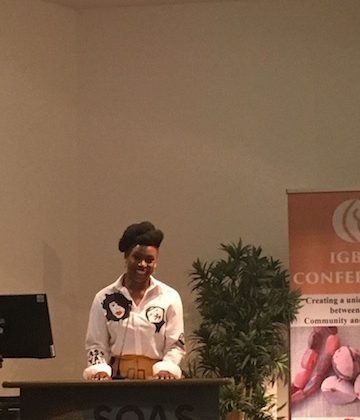 At the 7th Annual Igbo Association Conference, Chimamanda Ngozi Adichie discussed the gap within Igbo communities to document and archive their histories. Adichie made a plea for all African communities in the diaspora to preserve their linguistic heritage. As a storyteller, Adichie talked about the journey of going from her hometown in Nigeria to Yale University to use the archival documentation of Igbo culture. Because of limited resources and few facilities, recordkeeping of African histories often takes place outside the continent. Adichie reasoned that scholarly interest should not be the only motivation for archiving our histories; Museums, churches, and libraries have proven to be significant economic investments in many countries.

What stood out about Adichie’s keynote address was the way she punctuated her presentation with Igbo expressions and humor. This act demonstrated her thesis that Igbo language matters; its use should be encouraged and encountered in a public setting. Adichie even revealed that she only speaks Igbo to her daughter. She explained that there are many ceremonies in her culture that require the use of Igbo language, they cannot be translated or reimagined in English. This idea echoes Ngugi wa Thiong’o argument that language is the vessel that holds our memory. It allows us to articulate and preserve our traditions; it awakens our consciousness as individuals and as a collective. The overall, benefits of language are that it strengthens our cultural ties; it engenders social interactions and improves how the brain problem solves.

Yet, despite the benefits of bilingualism, African diaspora communities often struggle to pass on their linguistic heritage. One reason is that socio-economic and cultural pressures play a prominent role in undermining that linguistic continuity. Often, there are many economic stressors on African immigrants; they work one or two jobs, or they work shift hours that tend to be long, therefore limiting the amount of time a parent spends actively teaching their kid a language. Second, the education system has its own standards and expectations. Immigrant children are expected to be proficient in English. If they perform poorly on literacy tests, or if a child needs a speech therapist, this news can be interpreted negatively by parents. Parents become self-conscious, believing that the home language is a hindrance to learning. As a result, they encourage their children to speak more English. Then there is the issue of bullying; immigrant children are often taunted about their African accents, and unfortunately, this can push many to rebel against cultural elements that make them feel different. Kids become embarrassed about their accents or their parent’s accents, so they choose to speak more English.

If we aim to preserve African linguistic heritages in the diaspora, we should look into ways we can invest in language planning. One solution could be identifying, partnering, and publicizing language centers within African immigrant communities. Another idea could be creating a curriculum of educational materials such as children’s books, dictionaries, and activity books that allow parents and children to engage the language. Lastly, we need to find bookstores and online distributors that can sell educational materials to immigrant communities in the diaspora. Not all languages are going to be available, but maybe a parent can choose one that their child is most likely to encounter. Swahili, for example, is already being used by the East African Community on the continent; why not promote it in the diaspora as well? This will create a market between individuals who need to learn that language and the resources centers who can supply the language.