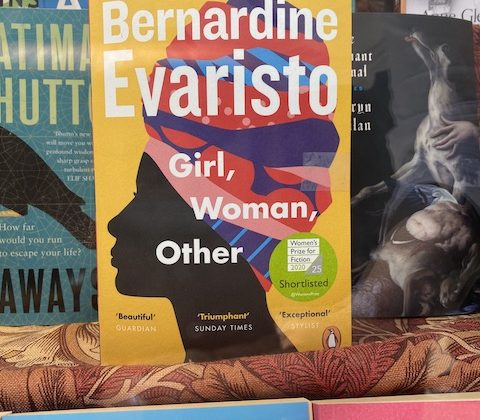 Bernadine Evaristo’s new novel Girl, Woman, Other is a tender, thought-provoking, and gleefully original novel that follows twelve characters as they chart a meaningful existence in Britain.

We’re halfway through the summer and many people are talking about Girl, Woman, Other by Bernadine Evaristo. Evaristo is a successful British Nigerian writer, critic, and professor who has published eight novels that focus on the Black British experience. Her latest novel, Girl, Woman, Other, has garnered tremendous praise from fans and critics alike. In 2019, it won the Booker Prize.  At the British Book Awards, Evaristo was named Author of the Year, and Girl, Woman, Other was honored as book of the year.  In addition, to these big awards, fans have applauded this book for its inclusive representation of LGBTQ experiences.

Set in London, Girl, Woman, Other is a tender, thought-provoking, and gleefully original novel that follows twelve characters as they chart a meaningful existence in Britain. Evaristo writes with complete abandon, no capitalization, no paragraphs, and lots of humor. In an interview she gave to Waterstones Bookstore, Evaristo refers to her writing style as “fusion fiction.” She wanted the stories to flow organically; the structure to resemble poetry but contain the unity of a novel. In adopting this fusion style, Evaristo allowed her characters to move in and out of each other’s lives without restrictions, a creative process she found “very energizing.”

What the reader will find energizing is Evaristo’s wit. The plot of the novel begins at the opening night of Amma’s play titled,“The Last Amazon of Dahomey.” The play has been commissioned by The National Theatre in London, a venue of tremendous prestige. As Amma prepares for the day, she is overcome with nostalgia for her youthful days rebelling and cussing out the mainstream. However, “the radical has now become mainstream” and Amma is ready for the professional and financial security that comes with being a member of that community.

As critics have pointed out, Evaristo pays close attention to the intersectional themes of gender, race, class, and sexuality but she doesn’t lose sight of individual stories. In fact, she tries to show the complexity and contradictions of these spaces. Evaristo gives us characters who are working to overcome the limitations placed on them because of their racial, gender, and class identities. They are imperfect but they always have agency. For example Amma, as a black lesbian playwright, she has faced years of rejection by theatre directors because of her radical antics but she continually asks for an opportunity. Similarly, Carole—a gifted mathematician from a working-class background, learns to shape shift in order to endure the racist/sexist treatment in corporate banking. Then there is a Megan/Morgan, who is shunned by her family because of her gender fluid identity but finds a welcoming community online.

Evaristo’s main objective is to show the inner mechanism that allow these  formidable women to survive and thrive in environments that often are not hospitable.  For Amma, the years spent on the margins result in a singular focus on her craft. When opportunity calls— she is grateful to take it. She is happy to finally show her work at the National Theatre, a venue of tremendous cultural significance in London. For Amma, this breakout moment quiets the inner voices of self-doubt; it also serves as an affirmation that perseverance pays off. Similarly, Carole is determined to ascend to the top of her career field.  She uses positive self-talk to weather the racist and sexist indignities within the corporate environment. In one scene, she tells herself: “C’mon, delete all negative thoughts, Carole, release the past and look to the future with positivity and the lightness of a child unencumbered by emotional baggage.” Lastly, in the case of Megan/Morgan, speaking with candor about her gender identity is liberating for other family members as well.

What lingers after you read this phenomenal book is the storytelling. Each character is an individual working through their hurts and triumphs. We see them alienated and restored into the people they want to be.  In all,  we see characters striving to overcome life’s hurdles in order to find acceptance and contentment. This is a wonderful book deserving of all the accolades it has received.

Review of The Girl With The Louding Voice