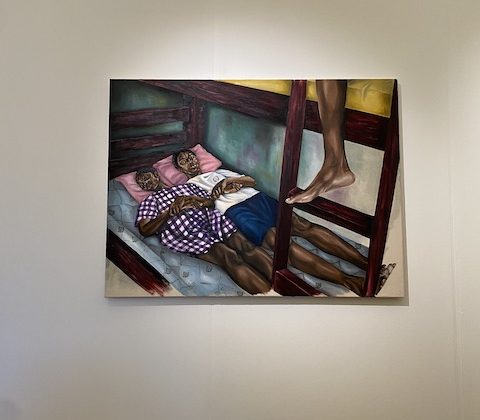 From activism to democracy; individualism to dignity, this year’s 1-54 Contemporary African Art fair touched on a myriad of themes that highlighted the unbreakable bonds between Africa and its Diaspora.

With many art events canceled or promoted online; 1-54 Contemporary Art Fair was the only major show opened to the general public during art week. Inside Somerset House, the mood was intimate and welcoming as artists mingled with art lovers. In this setting, we were all reminded why 1-54 is such a special event, it champions visibility and spontaneous cultural exchanges that cannot be replicated on a digital platform. As one art lover noted,  Despite having a smaller amount of art on display, a public viewing was better than having it purely online. In-person, you get to appreciate all the details and textures an artist is trying to communicate.

No doubt, this has been a transformative year for the world. Not just in terms of the disruption caused by the pandemic but also in terms of the activism led by The Black Lives Matter Movement. This year’s marches have forced individuals and institutions to reflect on racial injustices that continue to shape our lives. Micro-aggression, police violence, limited access to health services are just a few of the issues that have inspired this collective scream for change.

For many artists, this moment is a continuation of their own engagement with issues of race, representation and visibility. Whether it’s through paintings, photography or dance, artists are already creating narratives rooted in activism. Thus, it was fitting that this year’s fair examined the unbreakable bonds between Africa and the Diaspora, particularly Afro-latinx communities that tend to be overlooked in discussion of the black experience. As Marie Gomis-Trezise, of Galerie Number 8,  pointed out, Black Lives Matter has had a profound impact on how the art world does business. There is greater effort to be socially conscious. As she notes,

I want our work to be respected.  How do we do that? It made me want to have more of a social impact in what I do, primarily through art. This installation, for example, is affordable print. [We want it] to motivate younger people to collect photography, and we also donate twenty percent of the sales to the Black Curriculum UK. I’m not based in the UK, but I know what I do can be replicated in different territories. I could be the leader of that. The pandemic has lost us money, but I see more soul, more consciousness, and I think we’re trying to be generous in everything we do. We feel good in what we do and the way we represent ourselves. That’s a win

This year’s fair touched on a myriad of themes: activism, democracy, individualism and dignity to name a few. One highlight was the attention paid to the racial turmoil in the Diaspora. Signature African Art Gallery, looked at police violence in America with a beautiful painting of Breonna Taylor, by Moufouili Bello titled, Say Her Name. This art was part of an exhibition that commissioned African artists to create works that commemorate people killed by the police. Similarly, Adjani Okpu-Egbe created a display case of books written by well known African American authors. In his commentary, Okpu-Egbe argued that race relations in America have had a disproportionate and negative impact on people of color worldwide. In creating the reading list, Okpu-Egbe-Egbe wanted to promote self-education as a road map to better engagement. Stephen Townes, also looked at the conditions in America. Represented by De Buck Gallery, Townes, sought to interrogate the question of history, identity and citizenship through his rich paintings and quilts. Using a wide range of media – oil, fabric, glitter, charcoal—Townes showed us a textured image of African-American life. His art, brought to the forefront notions of personal dignity, racial heritage, and freedom, ideals that are currently being debated in America.

Uncompromising individualism was another highlight of the fair. No doubt, Sungi Mlengeya, was the darling of this year’s exhibition, joining the ranks of artists such as Nelson Makamo, Mary Sibande, Ian Mwesige, and Prince Gyasi whose previous participation created a collective buzz among many art lovers. Represented by Afriart Gallery, Mlengeya best captured the theme of individualism in her minimalist paintings of women squatting, sitting, and standing. These women’s self-awareness and nonchalance communicated an idea of individualism rooted in contentment.

Last but not least, Ekene Emeka-Maduka was my absolute favorite. Represented by Polartics gallery, Emeka-Maduka showcased a series of paintings titled, St Agnes, which chronicled her boarding school experience in Nigeria. In the above featured image, “Chaos Turns Placid Before The Bells Ring, 2020,” Emeka-Maduka explored uniformity as being at odds with individuality. She subverted the idea of conformity by painting herself as the central figure in the varying scenes.  In so doing, Maduka winked at the concept of homogenous communal spaces and found a way to personalize them. All in all, her paintings seemed to hold two emotions at once: on one hand the viewer saw inner turmoil and rigidness while also reflecting order and calm.

We should all applaud the brave effort that went into making this exhibition possible. It was not easy to navigate the covid-restriction that prevented many artists from traveling to engage in the show. Yet, 1-54 Contemporary Art Fair reminded us of the importance of these supportive platforms; they play a critical role in fostering social connection as well as empowering creativity and ingenuity. This fair took place at Somerset House, 8-10 October 2020.