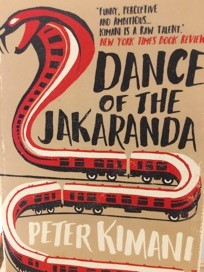 Peter Kimani recently visited the School of Oriental and African Studies in London where he led a lively discussion about his novel Dance of the Jakaranda (2017). Kimani told the audience that the statement that best sums up his book is: “Not being seen is not the same as not being there.” At the beginning of the novel, Babu, the protagonists, speaks this statement to his grandson Rajan when the lights flicker off briefly. The statement also appears at the end of the novel to emphasize how the historical record has erased African and Indian workers who labored to bring the vision of connecting different parts of the colony by a monstrous train. In his reimagining, Kimani weaves the tale of the railroad – its power, beauty and destruction – with the development of the Kenyan colony. Like the railroad, it was the everyday people that brought it to life; sometimes their labor was voluntary but often times it was through forced conscription.

In this historical novel, the plot is multilayered; both political and personal. On one hand Kimani is examining the power of this machine to reorganize rural life, on the other hand he is reframing the historical record on how the Kenyan colony came to be. Who came up with the vision? Who executed that vision and where does credit belong? Interwoven in the historical details is a love story, in which the reader follows love-sick Rajan as he goes searching for Mariam. What stands out in the book is how Kimani links Rajan’s search for a lost love with Babu’s love and fidelity to his country. It is Babu’s unwavering love and commitment to Kenya that Kimani is out to prove and restore.

In unearthing and re-examining the history of the Kenyan railroad, Kimani is also bringing into focus the politically constructed silence that refuses to credit individuals who labored to bring the colony’s grand visions to life. In particular, Kimani is saying, lets juxtapose this historical silence with the noise of the railroad itself. In particular, lets look at the imposing movements that shake the ground, not only destroying the African landscape but also the foundation of African people’s way of life. In this sense the railroad becomes a metaphor for the Kenyan state, which under colonialism is remote, domineering and well organized; but it changes into something belligerent and jerky post-independence. It is from this vantage point that we can begin to evaluate Kenyan national identity. How did the state exploit members of its national family, how did it betray and exclude others? And if we move away from the state, then what impact does this damage have on individual families?

Moving from state to family politics, Kimani explores how these political episodes pierce into everyday life. It is under these considerations that he looks at the impact of silence on individual characters. He shows how Reverend Turnbull and Ian McDonald keep silent to hide their misdeeds and to avoid eroding their stature in European circles. Similarly, we see Babu concealing the truth from Rajan as a form of self-preservation or to calm familial turbulence. Kimani shows that there is a price to pay for maintaining this silence, and this price is betrayal, mistreatment, and anxiety. More importantly, the motivating factors that underlie grand political ambitions can often be instigated by a singular and personal need. Kimani has written a compelling story about the African and Indian experience in Kenya. It is a timely story that adds to the canon of African literature. I highly recommend this book.